Kim has performed at "THE SPECIAL EVENT" writing a custom song for the most successful Event Planners in the world. He has Entertained at Disney for over 20 years and is also a Celebrity Ambassador for "Variety the Children's Charity.

​Kim has also entertained for hundreds of Fortune 500 Companies.

Whether it's performing a hilarious and heartfelt Song for the CEO of Sesame Street or Entertaining at a Live Telethon for Variety the Children's Charity, or singing The National Anthem for the Anaheim Angels AND Ducks, Kim is a versatile Entertainer who will add a unique touch to any Event. You have to experience Kim's quick wit, engaging charm, and Showmanship for yourself, then you'll want to share him with your guests. 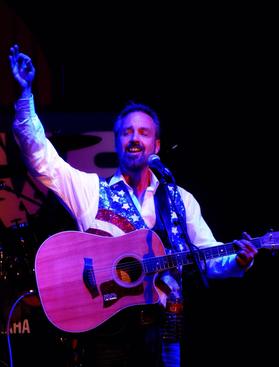 Kim Olson known as "KO" has entertained audiences from around the world at Disneyland Resort in California. He also performs at special events all across the USA and Canada,.
Originally from Northern Minnesota, Kim started singing at Lutsen Ski Resort in Lutsen Mn in his early teens. He moved to California and continues to work in movies, commercials, and Corporate events as well as performing at Disneyland Resort.
Kim is always busy with songwriting projects and was nominated for the Best Musical Score for an Internet Short Film. He recently whistled for the soundtrack in a new movie called, "The State of Bacon" which has its roots in Iowa. His song, "Damn I'm Good' is in a  new Feature Film soon to be released.
In December he was honored to perform at Walt Disney Studios for the marketing of Frozen and also Saving Mr. Banks.
The Variety Telethon of Iowa is always a highlight for Kim and he is proud to come back for more than 30 years. Kim Olson is a Celebrity Ambassador for Variety International.

the Amazing Cook on TV

for an Internet Short Film!

This was written for

the Author of the Book